Polycarboxylate superplasticizer can reduce the unit water consumption without affecting the workability of concrete; or improve the workability of concrete without changing the unit water consumption; or have the above two effects at the same time, Admixtures that do not significantly change the air content. At present, the concrete water reducing agents used are all surfactants, which are anionic surfactants. 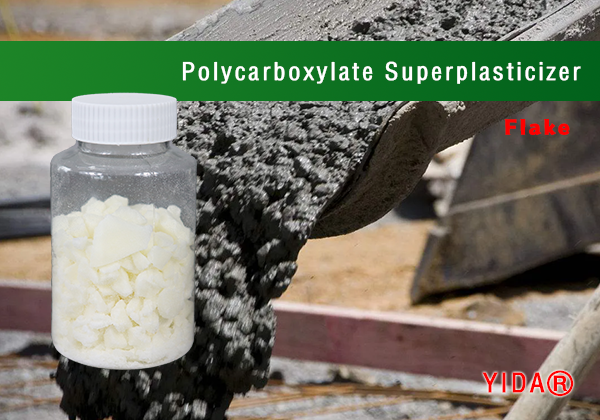 After the cement is mixed with water, a hydration reaction occurs, and some flocculated structures appear, which wrap a lot of mixing water, thereby reducing the workability of the fresh concrete (also known as workability, which mainly refers to the fresh concrete during construction, that is, In the process of stirring, transportation, watering, etc., it can maintain uniform and compact performance without delamination and segregation).

Why use PCE? Because of the small dosage and high water reduction rate, the water reduction rate can reach 18%-40%. According to the needs of the project, it can also be made into retarded type and early strength type. The loss of concrete slump with time is small, and it has good adaptability with most cements. The early strength enhancement effect is good, adding an appropriate amount of YXA, the early strength of concrete can be increased by 40%-100%, and the later strength can be increased by 30-60%, which can greatly reduce the amount of cement, or greatly increase the amount of mineral admixtures. , reduce engineering costs.

Powder PCE and liquid PCE are the more conventional PCE forms at present. But both have different disadvantages.

For example, after powder PCE is made into an aqueous solution, if it is left standing for a long time, delamination will occur, which will affect the use.

For liquid PCE, there are transport risks and cost issues. So, to address the pain points of conventional PCE. Hebei Yida has launched a new generation of flake PCE, which is solid and has no transportation leakage problem. At the same time, it can be dissolved in water in any proportion to make a polycarboxylate water reducing agent mother solution, which is convenient to use.

If you want to know about PCE flakes , you can contact us for details.